Back to the Dru

The clouds finally lifted off the hills around Chamonix to reveal wet rock and fresh snow on the faces high up which scuppered plans of doing the Traverse of the Chamonix Aiguilles, the next big route that was on the agenda.

Greg and I thought that a quick day hit on the south face of Aiguille du Midi for some easy access rock climbs would be a good plan, but as we arrived at the station for the lift to take us up we were welcomed with the mass of tourists queuing for their turn on the Midi. I love how as climbers we feel that we are superior than the crowds of multi nationalities, bumbling around always looking surprised and shocked at anything they see. Some of these tourists get a bit braver and will ask for a photo taken with you in your ‘climbing outfit’, but I feel I must warn you that once you let one of them have a photo then you get the whole tour
group asking, they come in a sort of
package deal!
So we decided to give the Midi a miss and pop over to ‘Footworks’, climbing shop opposite the station, to see Mr Colin ‘T-Bird’ Thornton and ask what’s going on. After a wee discussion in the shop we came up with the idea of heading back up to the Dru in the afternoon from Montenvers to bivvy at the base and climb the mega classic American Direct the following day.
The access to the bottom of the Dru from Montenvers was a lot easier than from Grandes Montes, which was the way Greg and I went the previous week when we went for the North face route. Now that I have seen that the approach isn’t too bad from Montenvers I’m definitely keen to go back up there for other routes on the face.
I knew about this good bivvy site at the top of the Dru Rognon, a rock island at the base of the Dru, from a friend of mine who had been there before. So when we found the spot we got the ‘poly bags’ out for sleeping in! When we were READY & STEADY we COOKed some fine cous-cous, by Ainsley ‘food guru’ Harriott. for diner and watched the classic 'Alpey Glow’ take over the surrounding rock faces before trying to get some sleep.
The full moon’s glow lit up the area, one more thing that you really appreciate when sleeping in the hills, as we set off on our early rise start leaving bivvy gear and mountain boots behind. 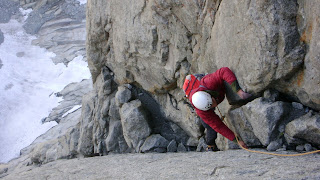 The route has a fairly easy start that takes you to the Socle, pretty much a massive terrace, where we saw two guys bivying the night before and managed to catch them up on the first main pitch, a 45m lay-backing Deidre. They were British and kind enough to let us go in front of them, but for some reason they kept trying to keep up by the leader of their team going in front of the second of our team. This just made things more awkward, but a few pitches later we managed to break free from the faff and started making good progress up the wall. The climbing on this uber classic rock climb was just what Alpine climbing in the Massif is all about, with perfect jams from fingers to fists!! Lay-backs, and also some sketchy teetering over scarily loose blocks the size of fridges!
All this climbing brought us to the ‘Jammed Blocks’, where most parties stop if not completing the route to the summit. As Greg and I climbed the North Face route to the summit we thought we’d just climb to here and abb down, but above the blocks there is a huge grade VII corner that had to be climbed. It has so much fixed gear in it that all you really need is a load of quickdraws! After we finished the corner, the process of abseiling on our new ‘tag-line’ system began. It went quite smoothly and we arrived back to the bivvy site for about 6 o’clock. It was too late to head down for the Montenvers train, so we decided to bivvy again and walk out in the down pour the next day, not before having a ‘cuppa soup’ and three oatcakes before another cold sleep!
Like I said earlier, I’m well psyched to head back up to the Dru for more, so there might be future posts to come from this area.
2 comments:

Dru-perb start to the season


I had one more crucial thing to do before leaving the U.K and heading off to the Alps. The Big Shop!! Britain is awesome for good cheap food which I made sure I stocked up with, stuff like cereal bars that you get sick of after surviving on them for a couple of days in the mountains. Porridge is also very cheap in the U.K but really expensive in France and is a great thing to have for breakfast to keep you going for the long enduring days that will probably turn into epics!

I drove out to France in Greg Boswell’s people carrier which we managed to fill with gear, food and supplies to see us through our exploits. Driving down we were talking about what routes we wanted to climb and any other objectives we had in mind.
Getting warmed up properly and acclimatising well is a very crucial thing to do at the start of a Alpine trip, as you don’t want to get too trashed and feel crap to soon. So we thought the North Face of the Dru, a classic 800m pillar of mostly rock climbing but with some mixed ice climbing as well, would be an ideal thing to do first! To quote Greg, “It doesn’t matter what your first route is as your going to be breathing out your arse anyway, so it may as well be a good route!” The Dru, a huge tower that stands proud and up-right over looking the valley, must be one of the coolest features of the Mt Blanc massif and is also one of the famous six North faces of the European Alps.
Probably one of the great things about Chamonix and it’s mountain range is the fact it has cable cars and lift services that take you high up into the hills, to make a bit easier on people with puny wee legs like mine.
With a quick weather check Greg and I decided to get the last lift up Grandes Montes and sleep in it’s luxuries toilet to give us an early start on the route. Both of us had a crappy night sleep but at 4:30 am we got up and left for the Dru. It took us about 2 hrs to get to the start of the route. The first sections of the climb felt fine and got through them in good time, but just below massive snow niche we managed to go off route which wasted a few hours correcting our mistake. A few  more pitches took us into the snow niche where we skirted up the side of and made our way onto the next rock section.
One thing that is quite awkward and takes a bit of getting used to in the Alps is route reading, especially if your not following big main features. The next section of climbing was climbing different cracks and chimneys to reach terraces and ledges, and trying to decide which is a ‘good ledge’ or a ‘good terrace’ is a bit confusing on route. Picking our way through the last sections of the face we topped out in the dark where we congratulated each other then had a look at the decent. After seeing that….. well we couldn’t see the descent route because it was Dark we thought it was best to bivvy and wait till morning to see what we were doing to get down safely.
The descent was a load of abseils then down climbing to arrive at the Charpoua glacier and then onto the Charpoua hut where I managed to go to the toilet in a very uniquely positioned porta-loo. From the hut you walk down a nice path that leads to the famous Mer de Glace and then climb up the hellish ladders which sap every last bit of energy before you get the Montenvers train back down to Chamonix.


What I like about these big routes is yeah, you make mistakes that cost you time maybe due to route finding errors or other factors, but you learn from them and hopefully don’t make them again allowing you to improve and climb bigger and hard routes. Super Psyched after ticking the first route of the season and am looking forward to the next episodes of what’s to come!