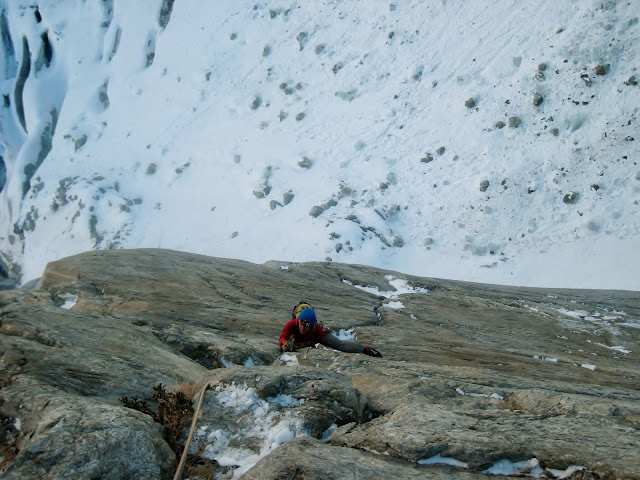 This Autumn hasn't been the most productive, due to really poor weather and conditions.  Mostly I've just been training either at the zoo, which is the local dry tooling venue, or at the wall. So I'm feeling strongish on the axes just now. However I've not done that much in the mountains so I wasn't sure what my head would be like on a hard mixed traditionally protected route.

So on Saturday Graham Mcgarth and Myself went up to the Rive Gauche area, to go have a look at 'Bringing home the bacon'. It was a route put up a few years ago by Nick Bullock and Pete Benson.  They plus a few other Brits managed to develop a lot of cool routes on this wall. The sector got nicknamed 'Sector Ecosse' as it's all traditionally protected, and you can find yourself climbing on a lot of turf. So was quite nice to go and feel like I was home again, even just for a little while. Well... Not that little, I did take my time on the route. Purely just to feel like I was in my homeland, not because I was pumped out of my little mind.
'Bringing home the Bacon' is about Scottish VIII, 8 or M6+. It has 3 pitches but I wouldn't recommend the first if it isn't that snowy, as we found out. The crag is easily accessed in 20 mins from the Grandes Montes mid station. We skinned in from the mid station so we could ski back down the home run, but you can easily walk in from the lift station as well.

Once we found the top of the route, we tied a 50m sport rope to a boulder. Then we abbed down that and rapped off or half ropes from the end of the sport rope. This easily brings you to the top of the first pitch. We decided to do the first pitch for the sake of it, so we did one more short rap down. Like I said I wouldn't recommend this pitch if there's not a lot of snow and ice around, it's just easy grooves with a lot of loose rocks lying around.

Graham lead the second pitch, which climbs this awesome crack line that goes straight up this wall. It has a few cracked bulges at the top of the pitch which gets the forearms going. Unfortunately there wasn't much ice in the crack. Which does make it easy for finding the gear, but I think it'd feel even more enjoyable to climb with ice filled cracks. 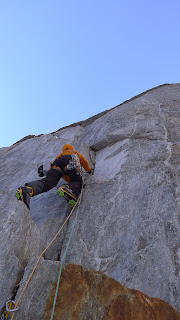 The last pitch is the crux, and I was quite keen to give it a bash and see what my head would be like on a hard lead. From the belay you climb diagonally up left on these obvious cracks filled with turf. You get really good pro and the after about 20m you'll find some in-situ wires, below this bulging roof. From here you traverse hard left for about 15m. The start of the traverse isn't too bad, you get some really good horizontal torques along with good protection. The feet are pretty small and spaced apart, so good feet work along with sharp points on the crampons is well recommended. Especially just before the end of the traverse, where it's pretty thin and bold. Take a few knifeblades, I did but Graham decided to keep them on his harness.  At the end of the traverse you come to a blank slab, which I convinced myself was the way. I didn't fancy climbing the bulge above me as I was sure that it looked really steep and pumpy. So I was sure I had to carry on the traverse for another few metres, until Graham told me to man up and go straight up. Turns out it wasn't nearly as bad as it looked. Good blob of turf, then some cracked blocks brings you to the top. I was told to take a stubby ice screw as normally the exit is a streak of ice, I didn't need it this time, but would recommend taking one just in case. It was a really cool route and I would go back and do it again another time when there's a bit more ice. Great fun to get pumped and scared again. Luckily for me it was still daylight when I was climbing, but unfortunately  the light was disappearing whilst Graham was on the traverse so had to just trust anything that his feet would land on.

We packed the bags, slung them on our backs and clipped into our adorable little approach skis. This was the first time skiing and mixed climbing in my new Zamberlan boots. Skiing in climbing boots requires a lot more balance than normal skis boots as you don't have these big plastic cuffs to support your ankle. However some boots like the Spantik ski pretty well as they have a stiff outer boot. So basically I'm just telling you my excuse for falling over. Which is what happened at the bottom of the GM home run. I lost my balance after hitting a patch of ice and then fell backwards. Then one ski released and nose of it dived into the snow underneath me. However as I was still travelling down the slope I landed on the tail end of my cut down skis, and ended up being mounted on my ski like a shish Kebab.  Which resulted in torn soft shells, thermals, boxers and bawbag! 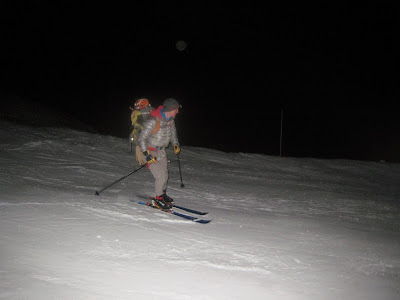