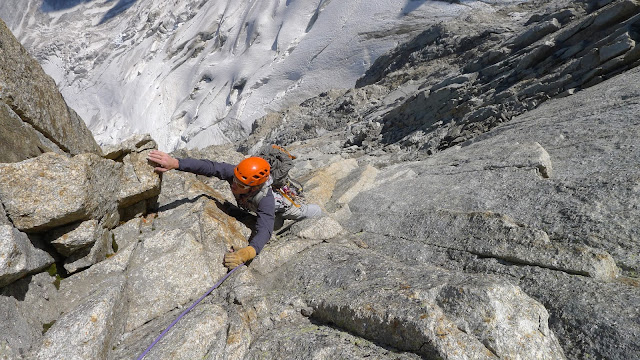 Courage... Determination... Raw Talent... Discipline... Drive... Self-confidence... These are all great characteristics of amazing athletes. Athletes also can have specific areas that they excel in such as power, strength, speed, balance... I regard mines to be my ''Off the couch performance''!
It's maybe not something I should be proud of, but is there any other test of endurance than sitting on your bum for a while then going for a jolly over the Grandes Jorasses?

The reason I was on my bum for a while was that I was back in Scotland for the month of June for various reasons including a climbing trip to Pabby and Mingulay. Also I was trying to do some lifey stuff, like looking for a job... Go on laugh as much as you want, but yes I do work sometimes! So the week before I came out to Cham I was on the slaptop constantly. With the kitchen only a few meters away, I'd be lying if I said my diet was something to be proud of.
My friend Callum asked if I fancied flying out to Cham for a quite hit on the Walker Spur. With a small weather window we'd have to be fast. As it turned out Callum couldn't make it due to various reasons. However now the seed was planted in my head. It was just by chance that my folks were driving out to Cham for a holiday in a few days time. So I asked around my Chamonix friends to see who'd be keen for the Walker. Ginger Ben wasn't too hard to pursued. The only down side was that I'd be arriving late Wednesday night and there was bad weather coming in on the Friday. Therefor we'd have to start early Thursday morning in Chamonix, hike up to the Mer de Glace, walk into the Jorasses, climb up the Walker spur and descend safely down the back. In a single push. This would for sure be a test of my ''off the couch performance''.


I drove out from the UK over two days and arrived in Chamonix around 9pm. After a bit of organising my gear I made it to bed for 10:30pm. Not before setting the alarm. You know it's gonna be a long day when your alarm tells you your gonna have 3 hours sleep, and that's at best...
Ben picked me up outside my house, then we drove to les Bois where we had a swift re-pack of our gear. Picking up my bag of the floor was exciting not because of the adventure ahead, but because of how light the bag was. I love doing these big long missions in the mountains whilst carrying nothing. It has to be the best way to go Alpine climbing.
We left the car at 2.15 am and made our way up to Montenvers train station. This was the part of the whole day ahead I was not looking forward to. The climbing on the Walker will be fine, once I get there... So this first hour of hiking up a steep path and onto the Mer de Glace was gonna be the test of just how fit or unfit I got on that couch.
Thankfully Ben, who always seams to be in shape, had just finished his guides course to be accepted onto the French Guide scheme. (applause) Which meant I had a chance to keep up with him!
Hiking up to Montenvers turned out to be fine which obviously boosted the confidence about the rest of the day ahead.

Even though Ben and Myself have walked & skied on the Mer de Glace many times, we still manage to get lost on the bloody thing. Luckily we didn't loose much time on it. After the remaining walk up the Leschaux glacier, we made it to the foot of the Jorasses just as the sun was coming up. The Jorasses's big looming walls were starting to become a reality of what we had lined up for the day. To say I felt super fresh after the walk-in to the base, I'd be lying. At least now though I only had to climb up... We weren't planning to bivvy on the face or at the top, so we had to keep moving.


Ben set off first and as I followed on the mellow terrain at the bottom of the spur, I had an instant reminder of what Summer Alpinism is all about. Loose rocks and shit protection. Why we do this, I just do not know. I honestly do not do not like Summer Alpinism that much. It's hot loose and takes ages to walk everywhere. Winter Alpinism however is soo much better... Cold, dark and you can ski around. But I hate the cold and I'm scared of the dark! Anyways... 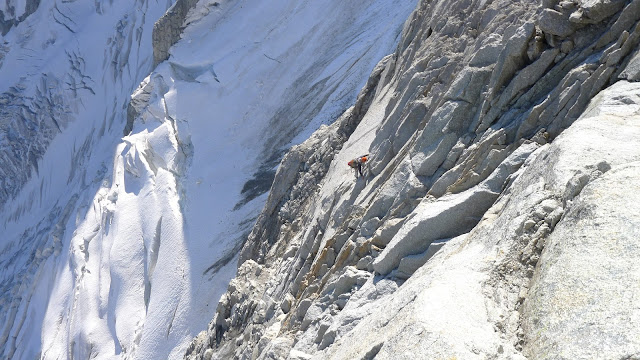 There was one team just ahead of us which we mange to catch up after the 'Rebuffat corner'. This is probably the first main rock climbing pitch. I would say it was like a Cairngorm E2 style of pitch. What looked to be great cracks, turned out to be thin seams. So take a few small wires for this pitch if you climb it. 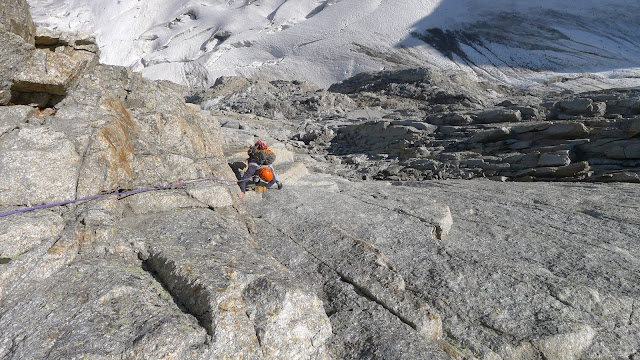 After that pitch we traversed horizontally around on loosish rocks to the 75m ''Ken & Diedre'' pitch. Ben took over here as he's a big 'Corrie' fan. for his block of leads/simul-climb.


After this I took for my block of leads/simul-climbing, which took us through the pendulum pitch. We thought the quickest way to do this was for the me to climb to the belay, from which you pendulum off, clip onto that and then be lowered down to the next belay. Ben then came over and I lowered him down to me. He quickly untied the rope and pulled it down. Then I set off again for some more climbing on loose blocks, Yey!

Ben took over at the start of the Grey slabs, which started with a really fun bulgy E1 pitch. It looked intimidating but there seemed to be really good holds on it. It felt pretty good to do some nice enjoyable climbing on the route rather than just scrambling around on precarious rock. This seemed to be the theme on the Walker. There would be some scrambly loose stuff followed by a nice section of solid enjoyable rock then back into sections of loose again. 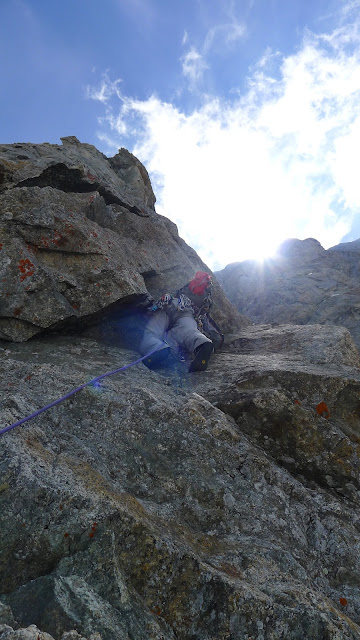 I took over again after the Grey Slabs. By now the time was about 2 in the afternoon and things were heating up. There was so much rock crashing down either side of the Walker spur. Mostly it was accumulated in the Colton-mac area. However even though I knew it was all happening pretty far away. I would still shit myself when I heard happening, and I would instantly freeze and sheepishly look above me to make sure it wasn't happening above me.
I climbed a really enjoyable E1 pitch that brought me to a long rock spur that lead us to the main headwall of the Walker. We just simul-climbed the majority of this. Until we reached the Red Chimney. Due to me not looking where I was going, I managed to climb into the wrong start to the red chimney. I found myself in a nasty wee spot where everything was pretty loose. It's a horrible position to be in. It'd be bad to rip a block off and for me to fall off, but more importantly I did't want to knock anything down onto Ben. We climbed the chimney in a few short pitches so that we could find shelter for the belayer.

Once I popped out of the main part of the Red Chimney I traversed out right. There is a continuation of the red chimney above that yo do not want to take as there is normally a constant flow of rocks falling down it. It's fairly obvious where to head out right. It was made even more obvious to me as there was two abandoned sacs which looked fairly fresh. I presumed they had been rescued.
After the Red Chimney Ben took over for the last block of leads. He traversed across a awesome slab underneath the red tower. The slab is smooth but you just walk across it. This brought us to the home stretch, which thankfully was fairly steady and quite enjoyable. Though by now I was starting to feel a wee bit tired. and being at sea level for the past wee while didn't really help my breathing. 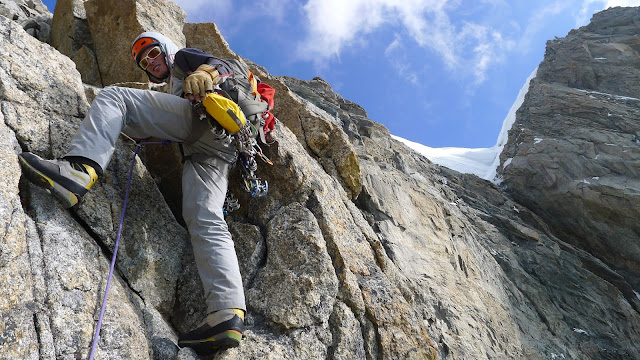 The very last steps on the Walker Spur is great. A few snow steps and you then pop straight onto the summit of the Grandes Jorasses. We topped out just before 7pm. The route took us around 12hrs from the base. I had only had a 1 liter of water since I left Chamonix. So it was time to get the stove out and make another liter. We chilled on the top for a bit, but it wasn't super warm. In fact I think I was more warm the last time I was there last October. So after i had made my water and got our 'Summit Selfie' shot, we made or way down.


Last Autumn the descent was really swift as you could down climb a gully next to the serac. However in the summer the descent takes that bit longer as you have to down climb the rock spurs. But it actually wasn't too bad, and we were down at the Boccalate hut for 11pm. It took us roughly 21 hours from where we left the car to climb up and over the Joarasses and down the other side to the hut. What was really fun about the hike up and over the Jorasses, was that I hadn't seen Ben in a while so we just had a good chin wag the whole way. After spending the night in the hut, along with a few Argentine's who had just climbed Manitua, we made our way down the remaining hour to the Italian valley floor. The path that you walk out on conveniently finishes at a bar. We thought it'd be rude not to have a beer. 4 beers and 2 plates of fries later, we left the pub to head back to Cham.

Here's a wee video Ben made of the day;