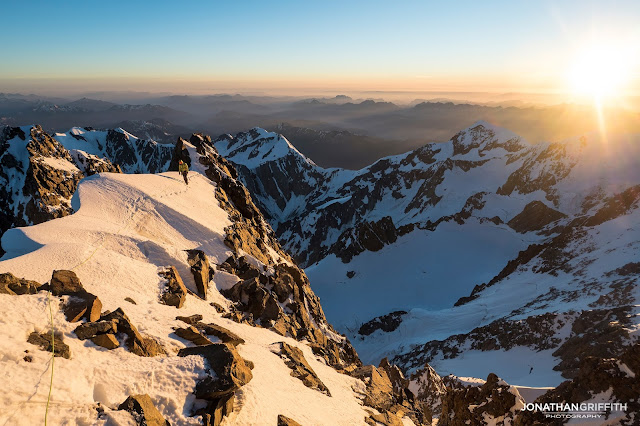 I have been pretty busy this winter and Spring with work and Guides stuff (blog to come soon about this, Which I'm sure you are all just sitting on the edge of your seats in anticipation for..). Due to being busy and conditions not actually that great in the Mt Blanc Massif for a while, I just wasn't getting much done in the mountains. I'm not going to be in the Alps this summer as I have my summer guides training test in North Wales. Knowing that I was leaving I really wanted to try and get a nice juicy climb ticked off. I came up with a few easier ideas but as always Jon came up with an interesting, to say the least, idea. The idea was to climb the Brouillard Integral in a single push from the bottom of the valley to the top of Mt Blanc and down the other side. The route is a long chunky branch that comes down on the left side of the South face of Mt Blanc (Italian side). It consists of very steep grassy slopes, loose scree, phenomenal rock ridges, snow, ice and many many meters of ascent. I must admit the Brouillard, or should I say the ''ruddy-ard'', ridge hasn't always been on my to do list. However Jon had been wanting to do it for a few years so I knew it must be something pretty wild and unique. At least if I did this big route with him, then I could tell him to leave me out of his crazy ideas for a while.

Jon and I headed through to Italy the afternoon before we were due to start our escapade. We fueled up on some pizza and sugary cans of pop, then decided to go spy out where the route goes and how we get to the start of it. We had to climb up a slope next to the road in order to get a good view from a far. It looked fairly simple and we scoped out a decent easy line of where to go to reach the base of the route. On the way down the slope back to the car I was greeted by a doggy. I presumed this was a happy fluffy cuddly doggy, so there for when to give it a nice belly rub. I do think this was a happy fluffy cuddly doggy or that he wanted a belly rub. Instead he decided to leap at me then bite down onto my thigh. The Italian owner didn't seem too fussed about what happened instead just gave a little shrug of the shoulders. I was so sure it was one of they fluffy cuddly dogs. Anyways we headed back to the carpark for some sleep. quite hard heading to bed at 8 O'clock knowing we were getting up at midnight. I think I got a few hours sleep.
We headed of in the morning around 1am full of confident about knowing they way from the previous nights scoping mission. In the first 2 minutes from when we left the path we were totally lost. What we thought was going to take 15-30mins. Took us 1.5 hours... At least there was cool wild life of little frogies and wild trout to entertain us. 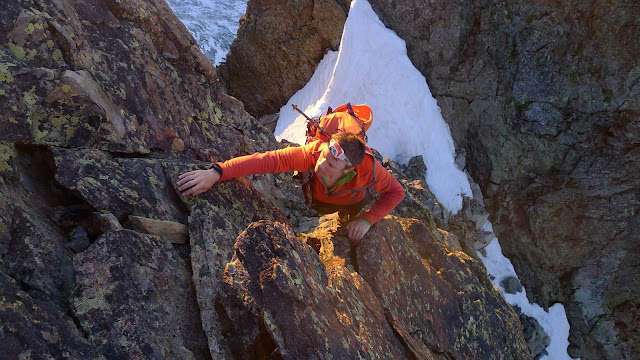 Eventually we found the toe of the buttress and started hiking up the steep grassy slope. This wasn't just like going up a section of steep slope for a while. It's angle was constant, the terrain didn't change much, it seemed to go on for ever and was... basically boring. 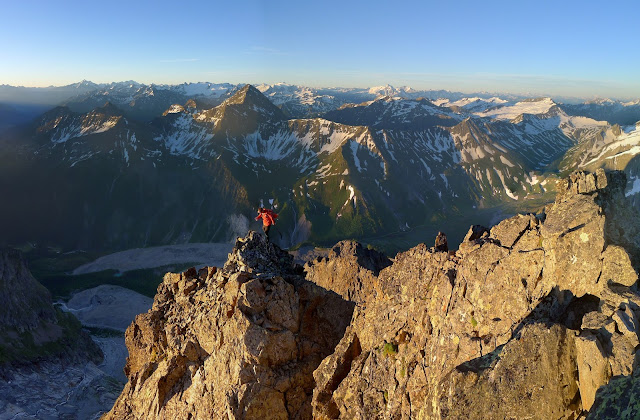 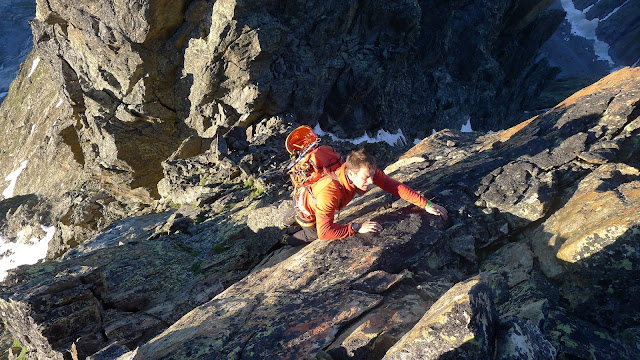 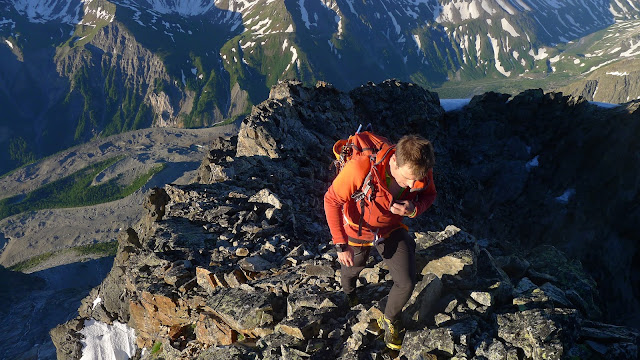 After what seemed like an eternity of being on the eliminator from Gladiators. We started to get some proper fun scrambling on rock. This section is actually called the Aiguilles Rouges. Most climbers will associate that with the area above Chamonix. The rock was of the same nature and felt great to be moving up and down on the ridge. By now the Sun was rising and was treating us to it's glorious display. We were starting to feel like making progress and feeling confident. Then we hit the snow line. 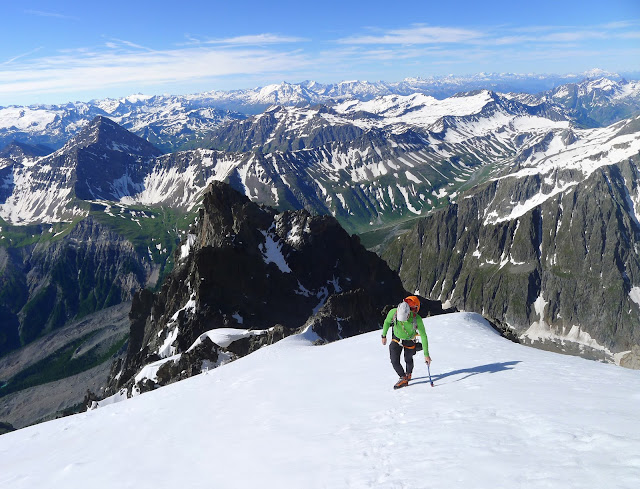 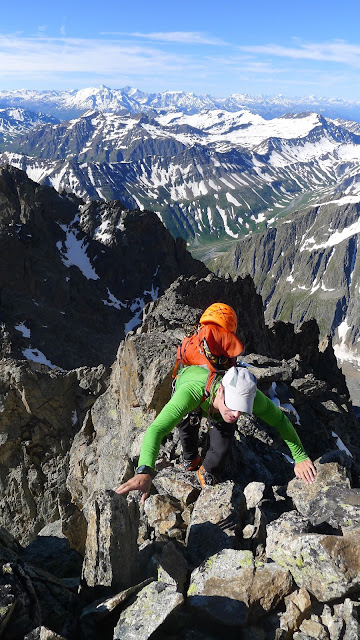 With so much snow in the mountains we had two chances. Either the snow would be well frozen and we could walk on the top of it (much faster). Or it could be soft, useless and would have the feeling of swimming through a slush puppy. Interestingly the first snow slope we came to was well frozen and we cruised it. Filling us with mass amount of confidence and comfort. We could already imagine the beer back in Cham. However in some sort of cruel manner the next snow crest we had to climb had become useless and we were digging a trench up the slope. All of a sudden that beer taste in my mouth had diapered. The remainder of the middle section to the Col Emile Rey was just horrendous. Parts of it were ok, but in the areas where a fall could be quite scary and serious was generally where the snow would collapse. Thankfully Jon took on all of this section. As much as he says he gets scared and says that he hates it, deep down I know he loves it. By now our feet were completely soaked.

On arrival to the Col Emile Rey, where the route steepens up into a proper piece of climbing, I could see the water pouring down the route. Patches of thin ice and rotting snow did not provide me with confidence. Knowing that I would be out in front for a while was given me the old Alpine butterflies (technical term). Jon made his way to the belay, after fighting through some sketchy and deep slushy snow, and brought me over. Now was my turn to take us up this steep wall of nastyness. I went over to where the main line goes, but after having water run down my sleeves and being hit on the head by falling ice I decided that this was not the way to go up. I retreated back and looked for an alternative. Jon says I was rather sweary at this point. I like to think I remained cool calm and collected. Up to the left was a small section of ice. To me me it looked like a massive column of death ice, at least WI8 or harder... Jon said I'd be fine. I hate ice. Anyways I made my way up the wee ice pitch.

After the ice pitch there was a few more pitches of easy climbing, mixed in with some more of our favorite snow. I literally tug a trench up the slope. This brough us out to the last large snow slope that would take take us to the top of Pointe Louis Amedee. (Which is kind of the top of the route, however you still have to carry on to Mont Blanc du Courmayuer then Mt Blanc)  Both Jon and myself were not really looking forward to this slope as I think we had this feeling that it was just going to be such bad snow. And digging a trench up a steep slope for 300m was not making us jump around with glee. I started making my way up the slope and all I could keep thinking was ''so far so good''. The snow seemed to have frozen more and I was able to make a nice steady book pack up the slope. The snow got a bit cruddy towards to the top, but thankfully it went pretty well. I somehow seemed to fine some energy and made good pase up the slope, i'm thinking this was down to the fact that I knew Jon would take over at the top and lead the way to Mt Blanc de Courmayuer.


We both were so happy to be finished with the main part of the route. We were fairly confident, having both been along to Mt Blanc de Courmayuer, that it would be fairly cruisy. But no.. this route didn't wanna stop just there. Instead we had to deal with a few more collapsing cornices and strong cold winds. This is where going in a light and fast alpine style can bite you in the bum. Ok so it's not big Himalayan mountains. But we both had really wet feet and wearing all our layers. low on food and hadn't really been drinking much water all day. I was starting to get really tired. And if something happened to us then things could have turned pretty shitty in a small amount of time. Lucky for me Jon is like a baby Yak. He got a solid head and can just keep on trucking along.
One of my biggest regrets on this route was that whilst we were making our way to Mont Blanc de Courmayuer I could see this amazing shot of Jon climbing in the sunset and the rope was being blown fully out to the side by the wind, given it a very Patagonian feel to it. I actually remember thinking 'Wow, that would be an awesome shot''. Sadly though I was to lazy to get the camera of the side of my harness and snap the shot up. That made me realise the difference in strengths between me and Jon. I might be a slightly stronger rock climber and maybe bit faster at running. But he has the strength to keep going and even when it's harsh and miserable, he'll get his camera out and take a picture to capture that moment. The guy has a big book to prove it as well.


Jon did a great job of breaking trail up to Mont Blanc de Courmayuer, but he did an even better job of taken us up to Mt Blanc. By now it was dark, the wind was gusting around 60-70kph, hands and feet were cold and my knee was starting to play up again. I really wanted to stop but I knew we had to just keep trucking along. Luckily Jon knew that as well and he just kept pulling the rope along that we were tired to.
We reached the summit at midnight. We had been awake for 24 hrs and on the go non stop. At the summit there was no shake of hands, pat on the back or even a smile. We didn't even stop to look at each other. We just walked over it and started heading down to the Gouter hut. The winds didn't die down at all on the way to the hut. We thought it might have just been blown on the summit. At the hut we managed to get a bed and some food. Slept for a few hours and made our way down to Cham the next morning.


It was a wild trip. Thankfully now I'm in Wales training for my Summer Guides test and Jon is in Chamonix waiting for his child to be born. So I think I might be to avoid his crazy ideas, for a while...