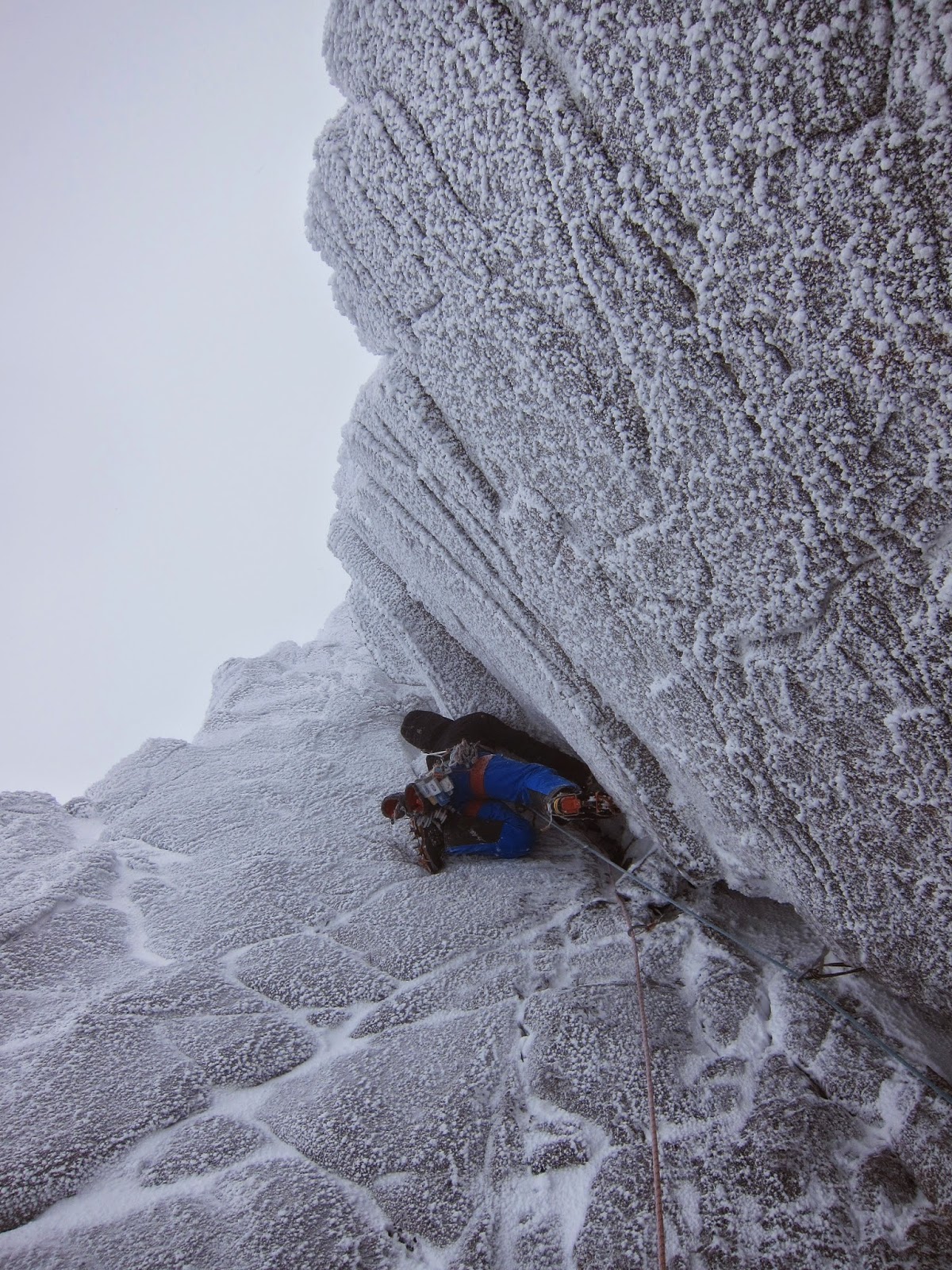 
Ry and myself headed up to Aviemore last Saturday night, but rather than sleep in his Fiat Panda we were welcomed into Mike's parents home in Carrbridge. Was so nice getting a proper sleep in a comfy bed, as well as having a relaxing breakfast and a leisurely start. Unfortunately though we were stopped by the snow gates at Loch Morlich, which delayed us by an hour and a bit. Our Original plans were to go for Ventriloquist VII,7 on No.1 buttress. However after the delay with the snow gate and the slow walk in due to some deep powder in places, we didn't get climbing till 12pm. So rather than have a super long day we thought we'd get on the slightly easier Auricle VI,7. Ry had climbed this route before so he knew what the climbing was like and how good it was, so was happy to go for another round on it. 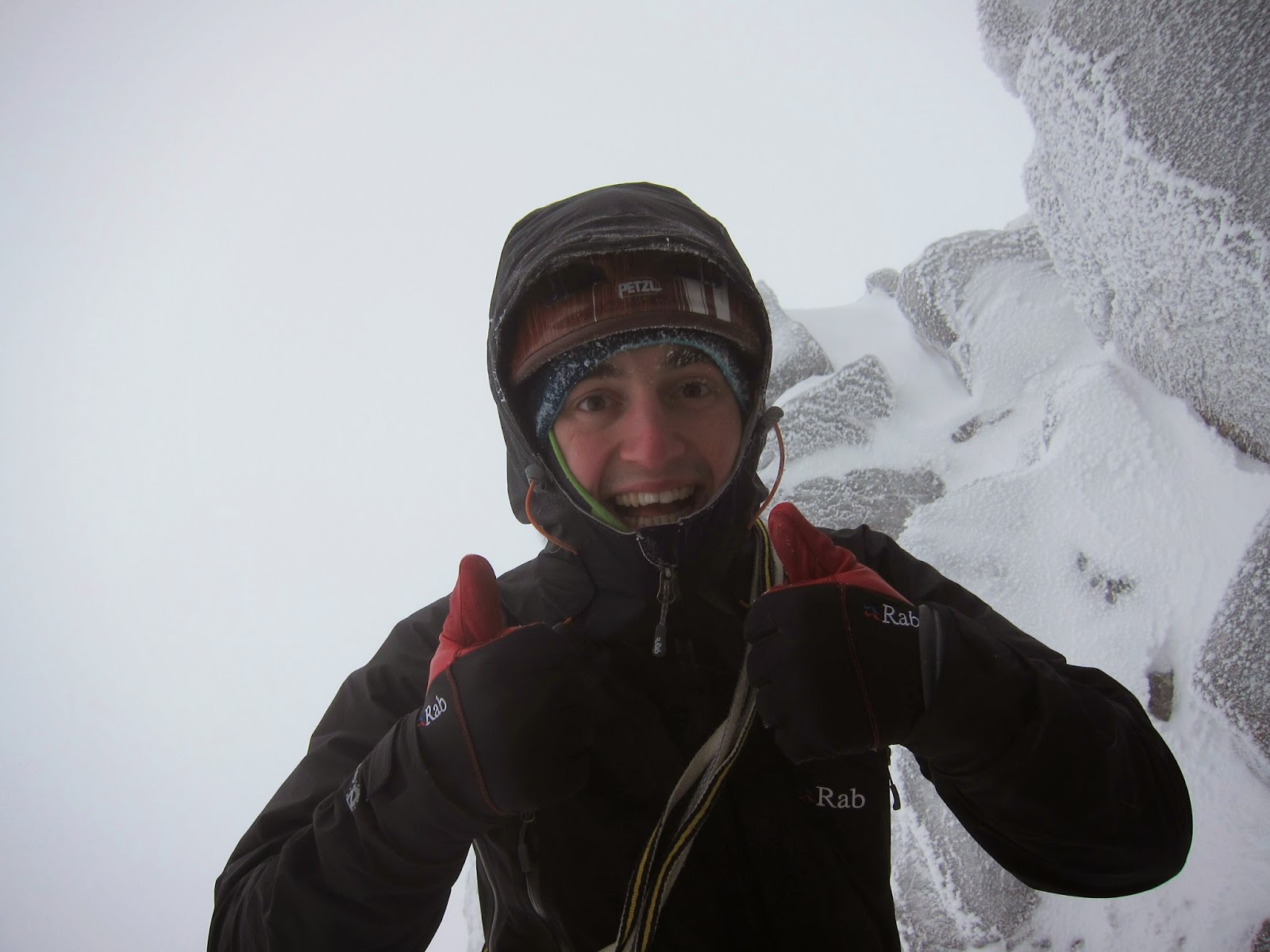 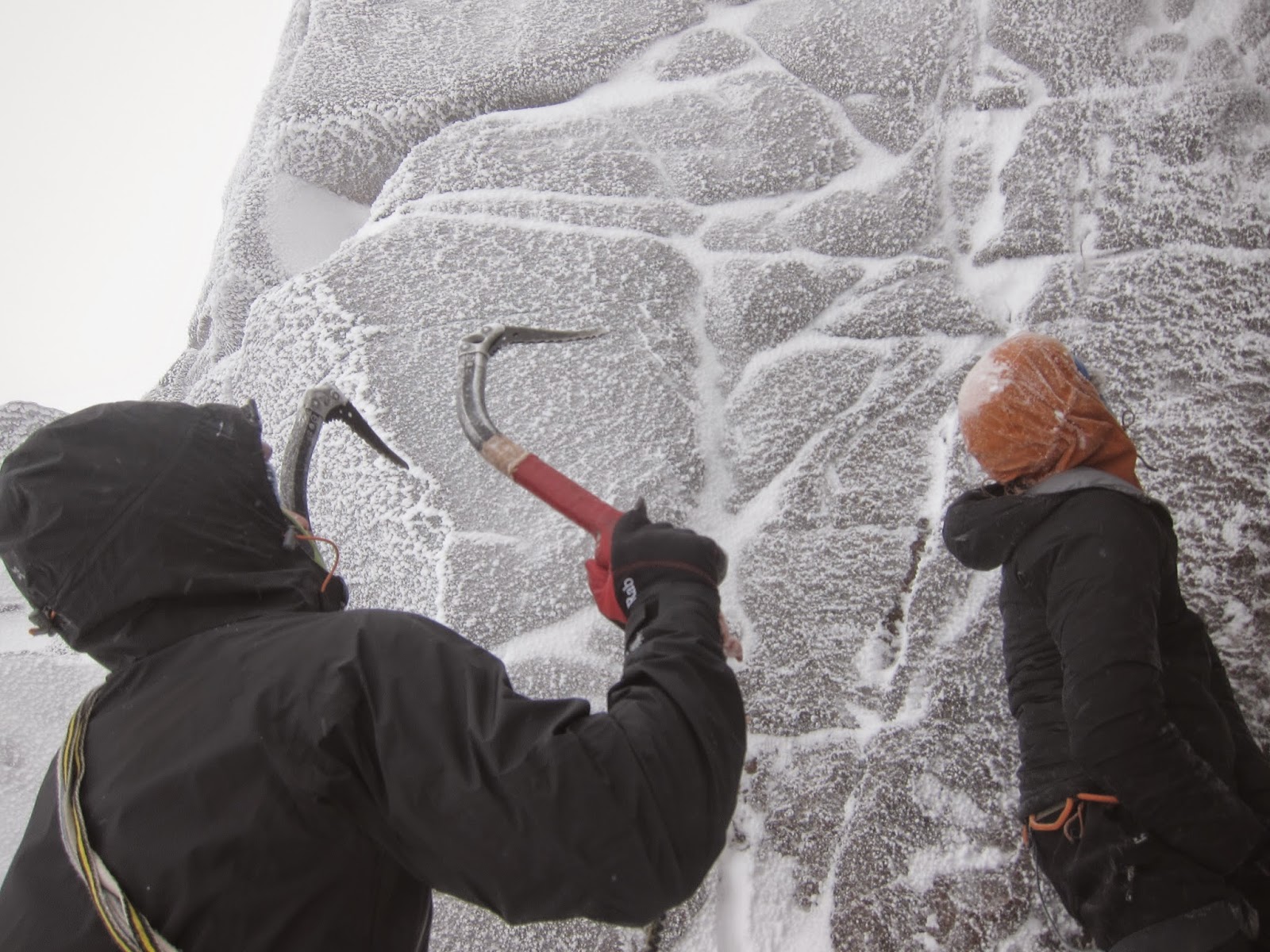 Mike set off first up the first pitch which was probably about IV,4. This brings you to the bottom of the very obvious open book corner of Auricle. He set up his belay then brought Ry and myself up. 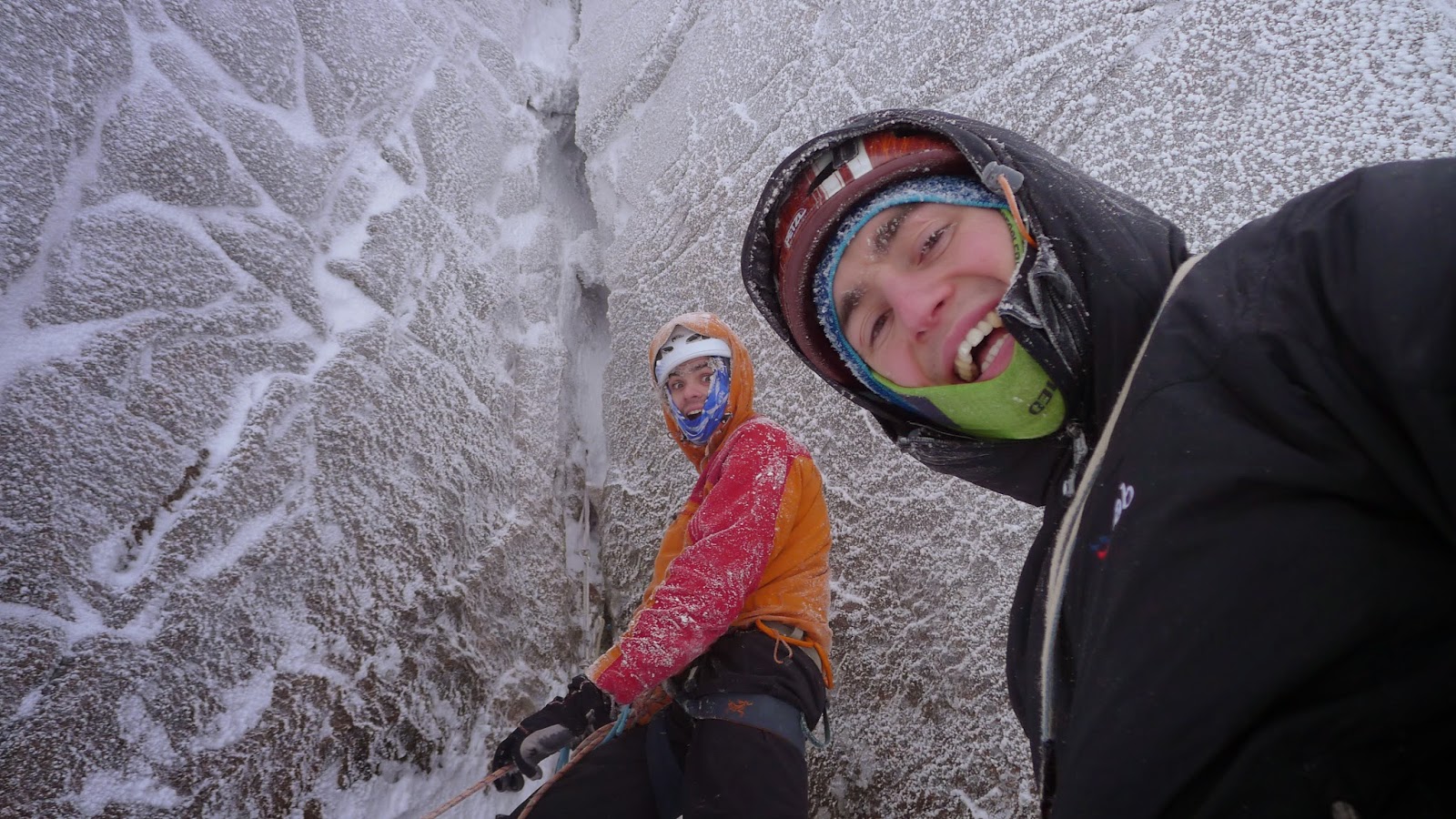 I then grabbed the kit from Mike and got involved with the short but pumpy corner. It starts of with these moves between chock stones. So gives it a very dry-tooling feel to it. Then you pull out left from a small cave and have a few thin moves to the next chock stone. The faces were covered in a nice frosting of hoar frost. Which made everything look pretty, but every time I would brush against the stuff it would blow back into my face. Blinding me and generally frosting my face up. A last wee squeeze through a small chimney brings you to a massive belay ledge. 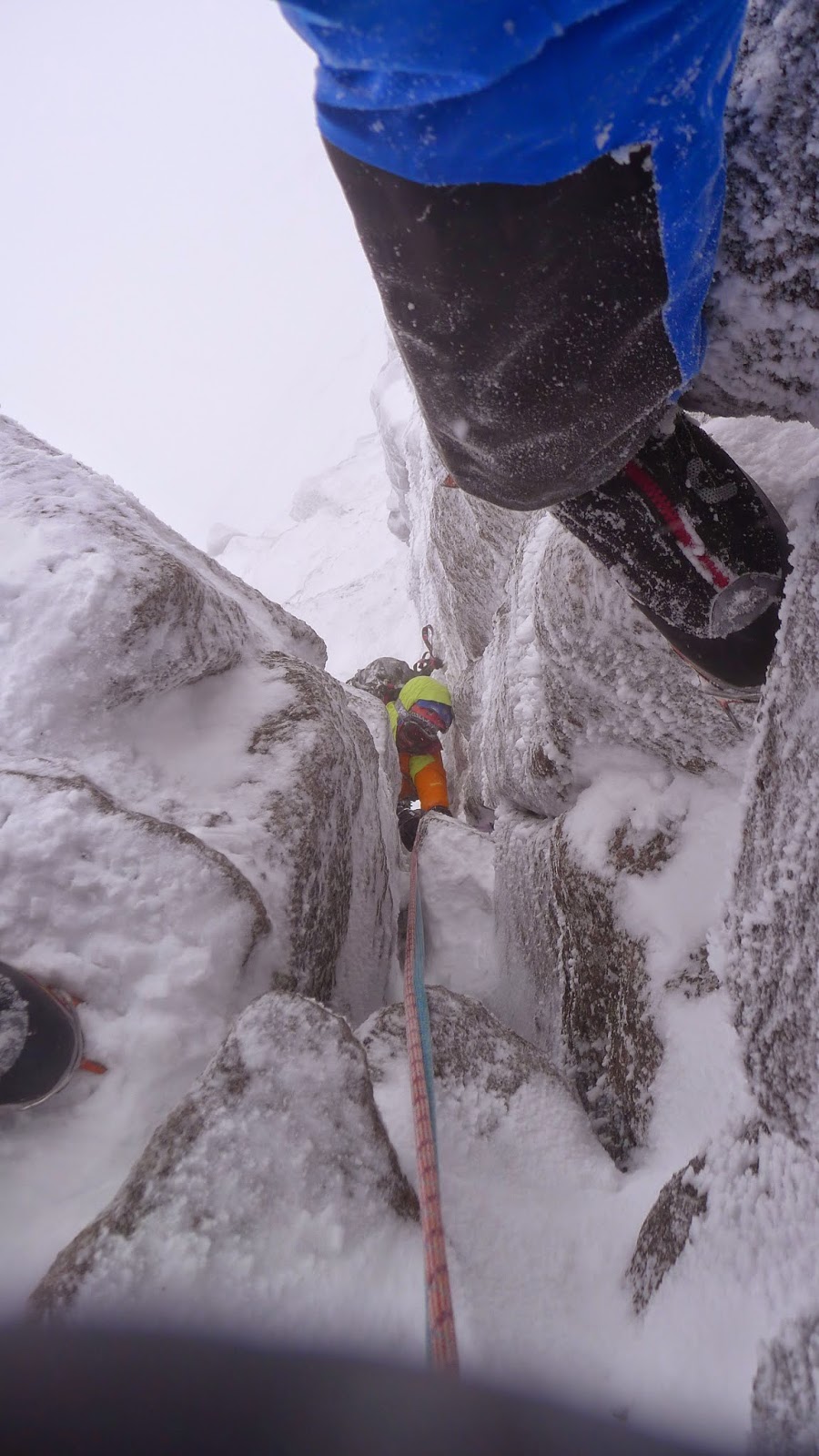 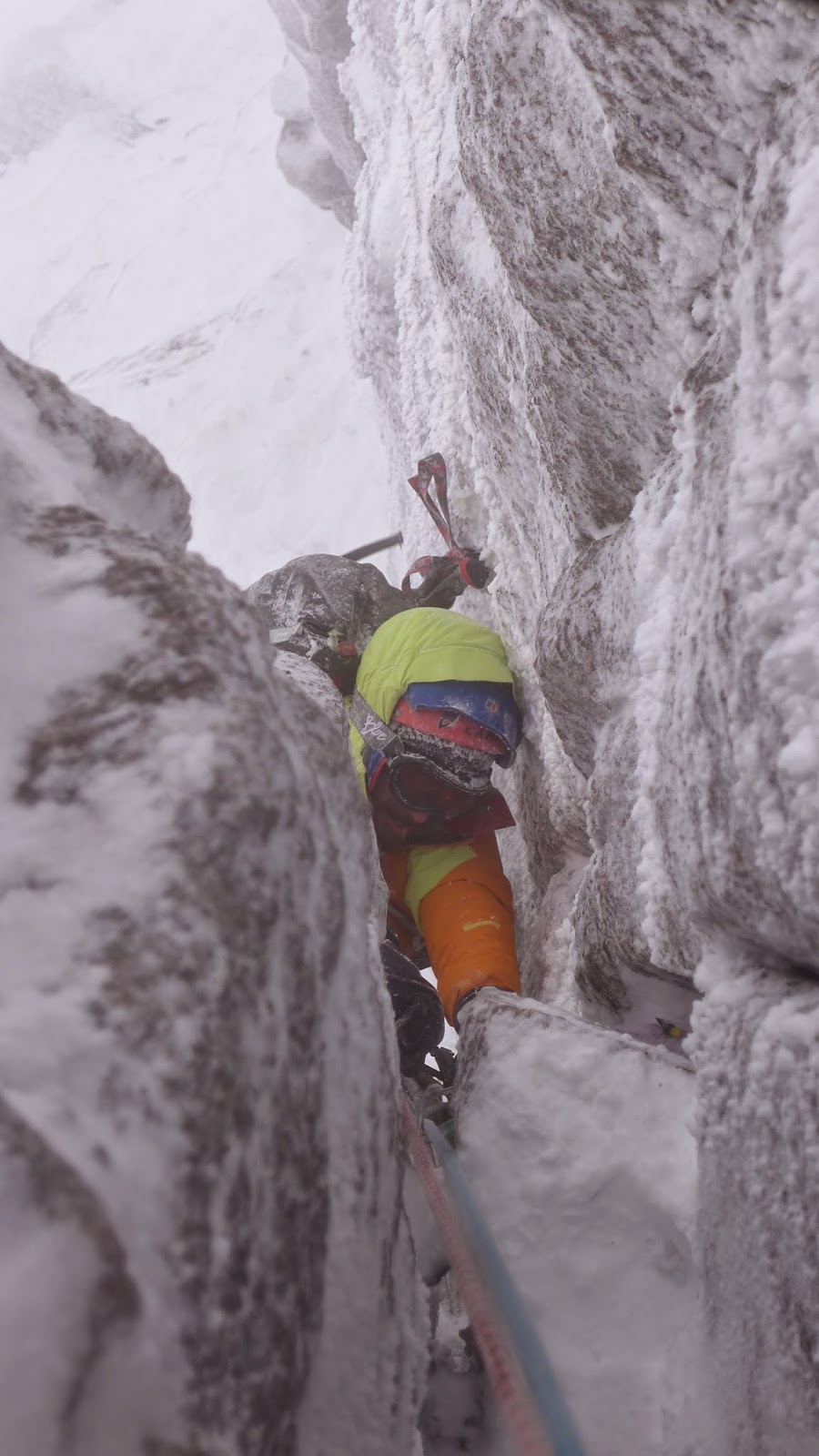 Ry took on the last pitch, again, as he climbed the last time he done the route. So we thought it'd be faster. The quicker we climb, the quicker we can go home! The pitch starts quite steeply from the belay, but every hook is massive. Again giving it a very fun sporty feeling to it. Then there's a slabby corner which brings you to a very awkward chimney squeeze. Made even more awkward with bags on. A few small steps brings you to the easy ground at the top. Then all that was left was the walk off down Fiacaill ridge. Which none of us had done before, and I think we built it up in our minds to be this mega Alpine ridge. Something like the Peautry Integral... Turned it wasn't.

Mega fun day out and was pleased with how we all climbed the thing fairly swiftly. Making it back to the car for 5. Cheers Boys for a fun day out.