Return to the motherland 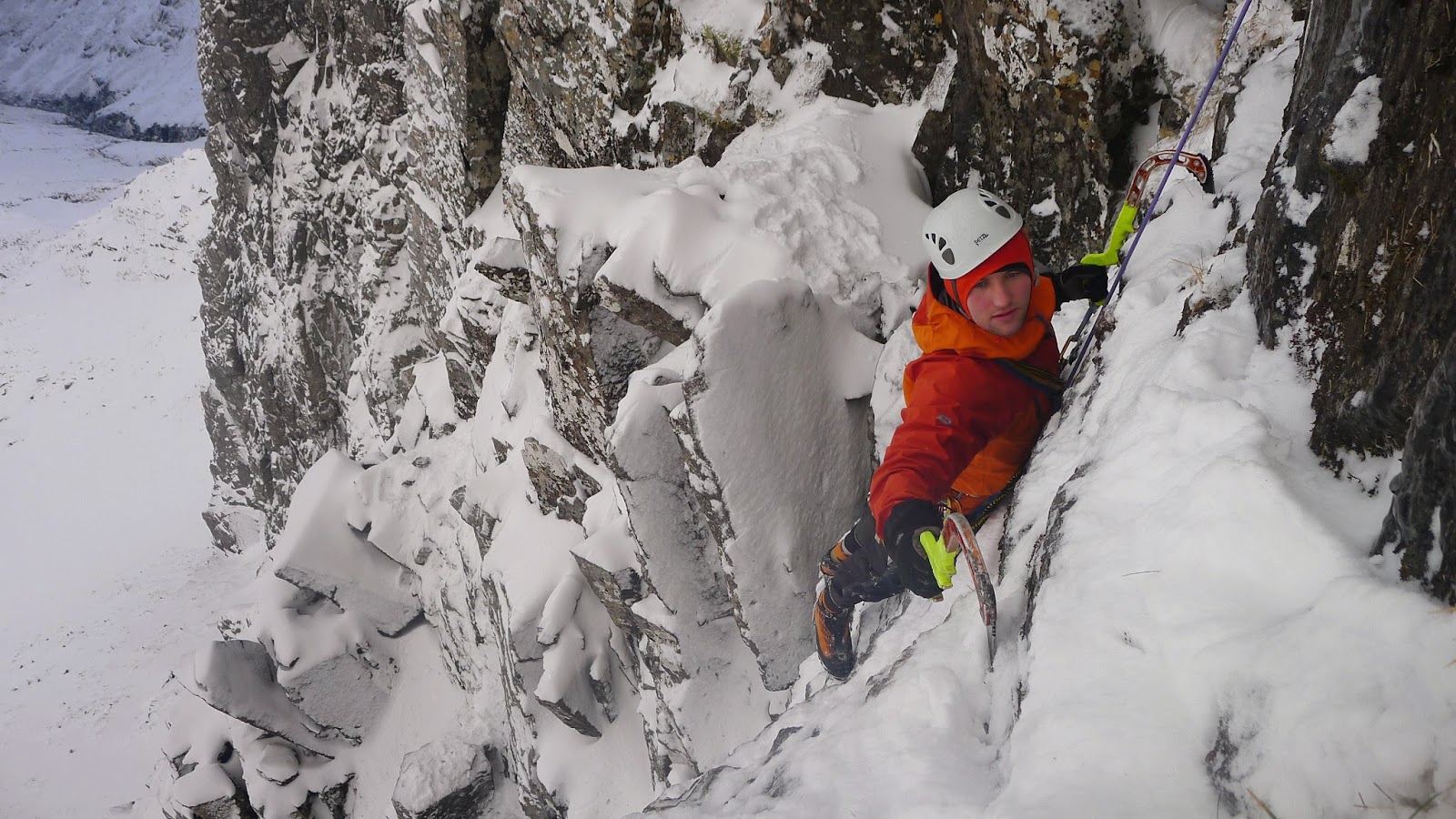 I try to find the clues of where to go. The vague footprints that someone before me had left is a good indicator. ''Are we almost there?'' I look up briefly to try find my bearings, but immediately interrupted by a piercing wind on my face that makes me shy away. One step in front of the other is all I could do. the cathedral'as the guard the corries entrance tower over me.....
Wait a minute!! I can't write this flowery shite.... I'm back in Scotland! They'll beat me up for talking like this.

Litter on the streets, cars everywhere, people looking miserable and+ grey damp weather that soaks into the bones. Yup I'm home and I'm loving it! Returning back to Scotland after spending 4 years in Chamonix has been amazing. Sure I've had wee trips back home but never properly lived in the UK for a while. My main reason I've come home is for the Scottish Winter climbing. The past 4 years I've spent trying to gain as much height as quickly as possible. measuring my gains in thousands of meters. Now, I'll be spending my days trying to climb 20m pitches, whilst being blasted by spin drift. And that's on a good day.

I moved to Dundee around the start of October and went into working at the local climbing wall straight away. A bunch of my mates all live in or around Dundee so I figured it'd be a good place to be based. Obviously the winter climbing hadn't started by then. So I caught the tail end of the rock season, and got a fine day up at the Pass of Ballater with a crew of people for my first day out.

There was quite a lull between rock and winter season. Luckily though I was kept busy with a couple of talks I had to do. These were to be my first ever talks about my climbing in front of people. The first was for the annual dinner meet for a climbing club I used to be in. Knowing everyone in the place did make it slightly easier.

The second talk I was asked to do was for the  Whitegoods dry-tooling meet in North Wales. The meet consisted of a competition at the crag, where you obviously scored better for an on-sight of a route. I had never been to the crag before, so asked Dougie if he'd be keen to head down as he was there the previous year. Plus he had a van... Greg was also keen to tag along as well as he had never been before either, and he loves a bit of tooling. So Team Scotland descended upon Whitegoods, and boy did they know about it! We weren't exactly the quietest bunch at the crag, but we did do pretty well on the climbing side of things too. Dougie and I got a bunch of M9's done, but the main event was watching Greg eat up all the hard routes at the crag. The fact that the crag hadn't been drilled, for axe placements, appealed to me. I struggle on the big 'poppy' moves you get at a lot of dry-tooling venues. Whereas at Whitegoods it's all natural so there's a lot of torquing and balancing on small edges, which I think transfers a lot more to Scottish winter climbing.

Head torches were worn for the last ascents of the day, then we all headed back to the pub for food and prizes. Greg won first place and Dougie came away with 'best fall', so Team Scotland did pretty well. After everyone had finished their food, we all gathered round for my talk. Unfortunately the cable that connects the laptop to the projector had been forgotten. So we literally did have to huddle round my laptop. Which gave it a bit more of a funnier feel to it. I quite enjoyed talking about some of the adventures I've had over the past few years in the Alps and other areas around the world.

The Scottish winter climbing didn't really get going until the start of December. My first day out was with Gav, my old man, who hadn't really done much winter climbing for a while. It's taken him 50 years of climbing to realise how cold and shit Scottish winter climbing is.... But of course he couldn't say no to a day out on the hill with his wee laddie. We headed up to Cairngorms, which is where most people go at the start of the season, Gav suggested we go to a small crag to the left of the ski centre, called Creagan Coire Chan-no, that has just been developed over the past few years. It's a really small crag but from looking at the topo, it looked like it could be perfect place for the start of the season. However once we abbed in, it was a different story. The crag was so dry that you could easily have climbed in your rock shoes! Luckily though there are a few different sectors to the crag. So we headed around the other side, and thankfully there was some things to play on around there. Gav went first up this turfy groove, but unfortunately the turf wasn't well frozen. So we bailed from that and I got on a line that wasn't shown in the topo, so it had potential for a wee new route at the crag.

The line followed some corners and grooves before exiting through a small roof. It was definitely a bit of a shock to the system to be scratching around for gear placements, trusting the axes on small edges and bits of turf. The exit move took me a while to work out but then found a wee hole in the rock and manged to get a stein pull (upside down axe), which allowed me to reach past a baggy crack. I called the route Punching Numbers and gave it VI, 7.

What has really struck me whilst climbing in Scotland this winter is how quickly the conditions can change. One day they can be really good then the next day everything can be totally stripped. I knew this happens but I suppose I've just not witnessed it for a while. I've had a few trips up north, only to walk in have a look around and walk back out again.

I got another fun day out with Gav just before xmas. We climbed the classics Fluted Buttress Direct IV,5, In Coire an t'Sneachda, Then afterwards wondered over and climbed Aladin's mirror direct IV,4.

The best climbing I've done so far this season was just after Christmas. Dougie, Adam and myself went up to Glencoe for a few days climbing. Dougie has a van that can sleep 3 folk, so it's pretty handy for wee trips like that. The first day we headed up very early to the lost valley buttress to climb Neanderthal VII,7. I had never been up there and had wanted to climb this route for a while. The weather was perfect but really cold. The route mainly consists of 3 pitches. Dougie went first which was easy to start with but then finished with a thin traverse.

I got the second pitch after loosing a game of RPS (rock, paper, scissors) with Adam. To be honest though, I'm pretty thankful. Still got a few more routes to do around grade 7 to get my head comfortable. I feel strong enough for them, it's just trusting my placements and moving more quickly that I need to work on. Anyways. I climbed the second pitch which started with a techy slab, and then finished up a groove/corner.

Adam was up next with the crux pitch. It consisted of a corner to start with, then a climb up and across a wall to below a step. Above the step was ice which made the exit very pumpy. He took his time but did an amazing job of not giving up and finding enough gear to protect him. We finished up in the dark and ran back down to Glen Coe for some food and beer at the Clachaig.

The next day wasn't quite as a early start, but the energy within us all was very low from yesterdays climbing. We slowly got the gear together and made our way up the path to Stob coire an lochan. Once we arrived at the crag though, the spirits started to lift. Even though it was still billy baltic. We decided to take it a wee bit easier than yesterday so went for Chimney Route VI,6. Dougie and Adam had tried it last year but bailed on the first pitch. Adam went for the first pitch, as he wanted to finish it off. It's a really fun pitch that climbs a very obvious chimney line, and you can back and foot most of the way up. Though there is a tough move pulling over a bulge half way up. 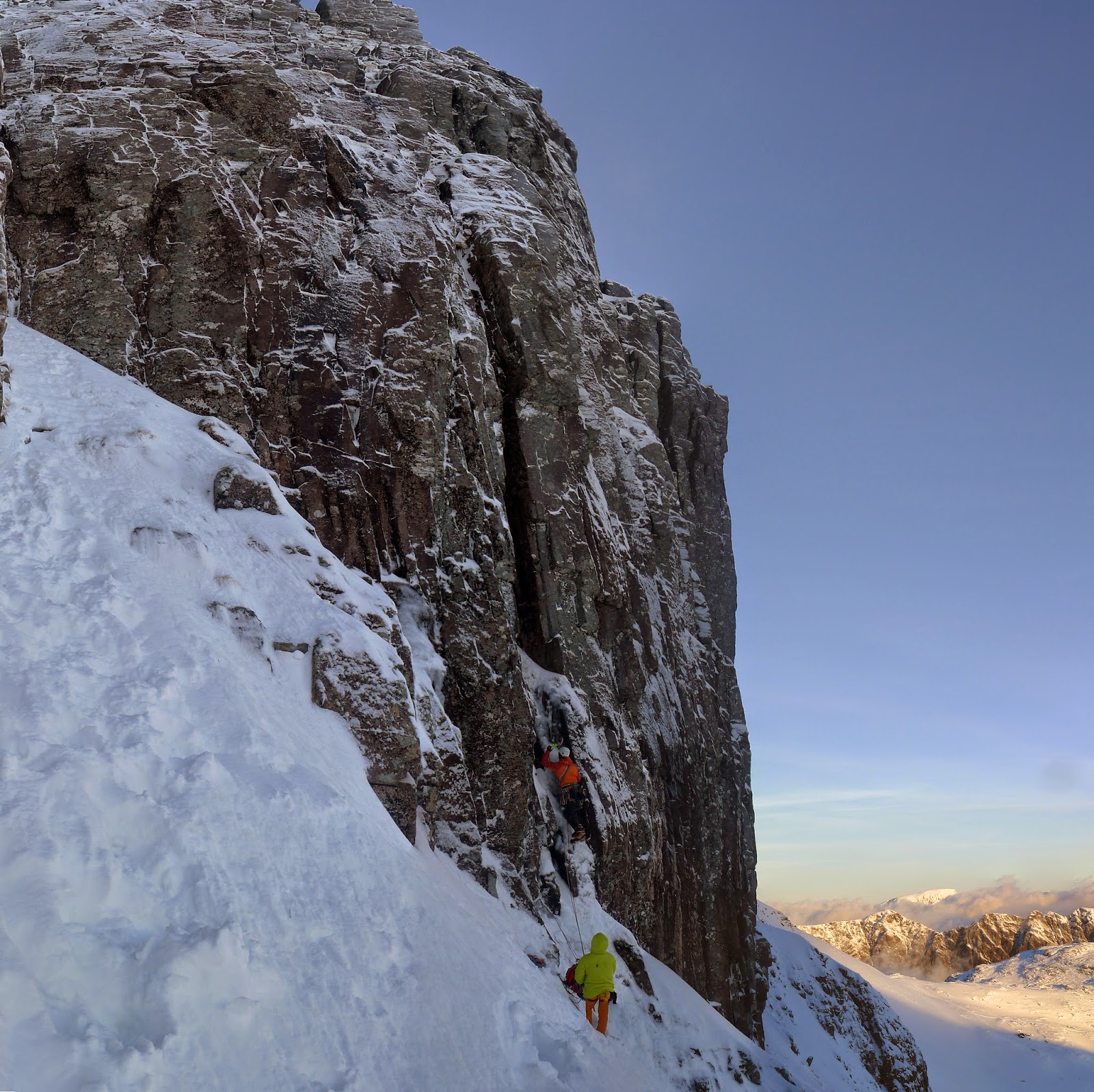 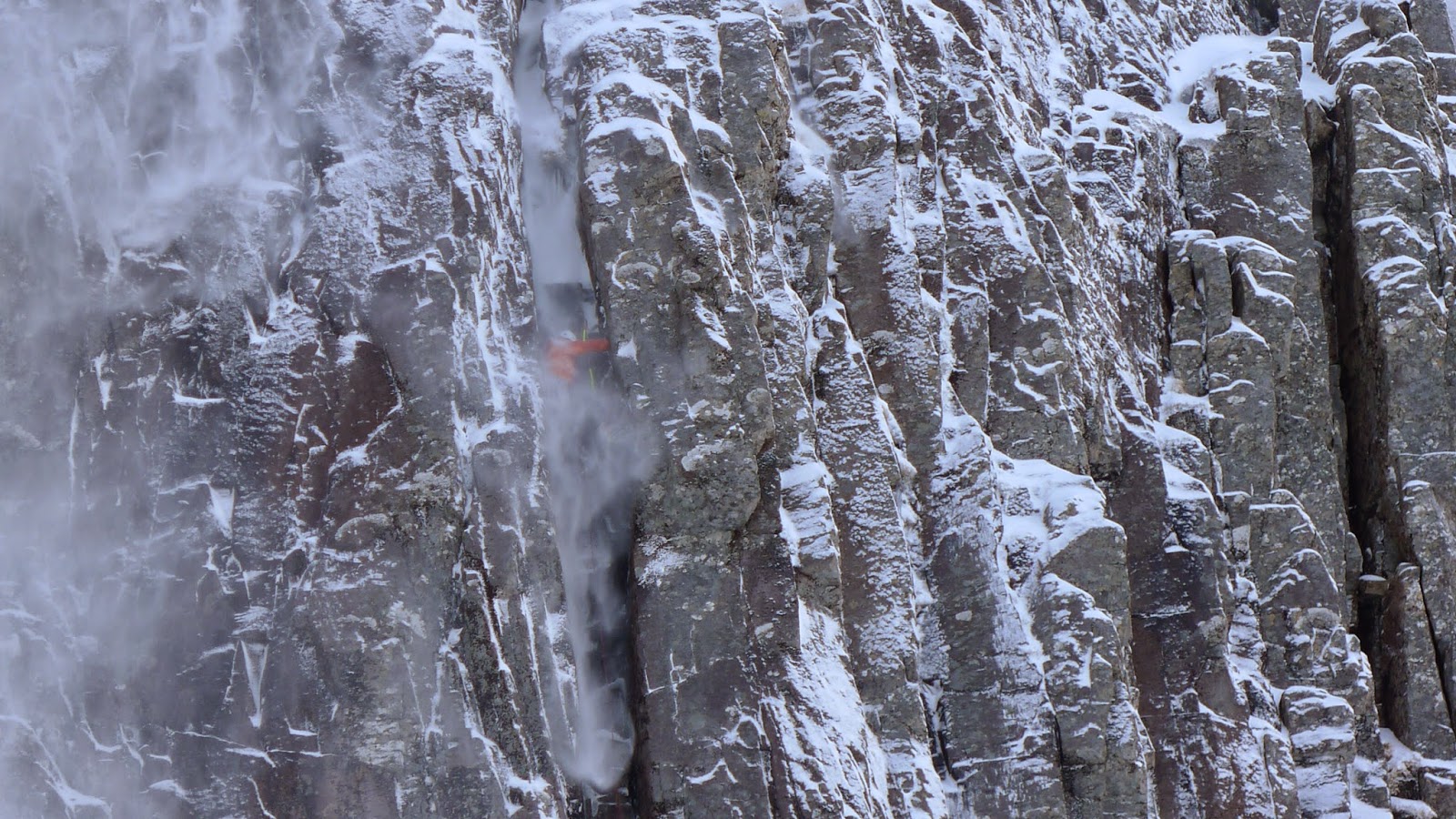 Dougie took on the second pitch which climbed mostly on turf, but had a wee corner move at the bottom. I then had the last pitch which goes up this very obvious tight squeeze directly above the belay, followed by a chimney with amazing hooks. From there it's easy ground to the top.

A quick bum-slide back down Broad Gully brought us to the gear. Then a run down the steep path back to the car and once again to the Clachaig for chili and a pint. We did plan to stay up for a few more days over the New Year period, but unfortunately the weather wasn't too good.

One thing I'm loving about climbing is Scotland just now is re-discovering all these amazing areas. Also I'm loving the views. I think I prefer the look of these more friendlier rounded hills as apposed to the spiky ones of the Alps.  :) 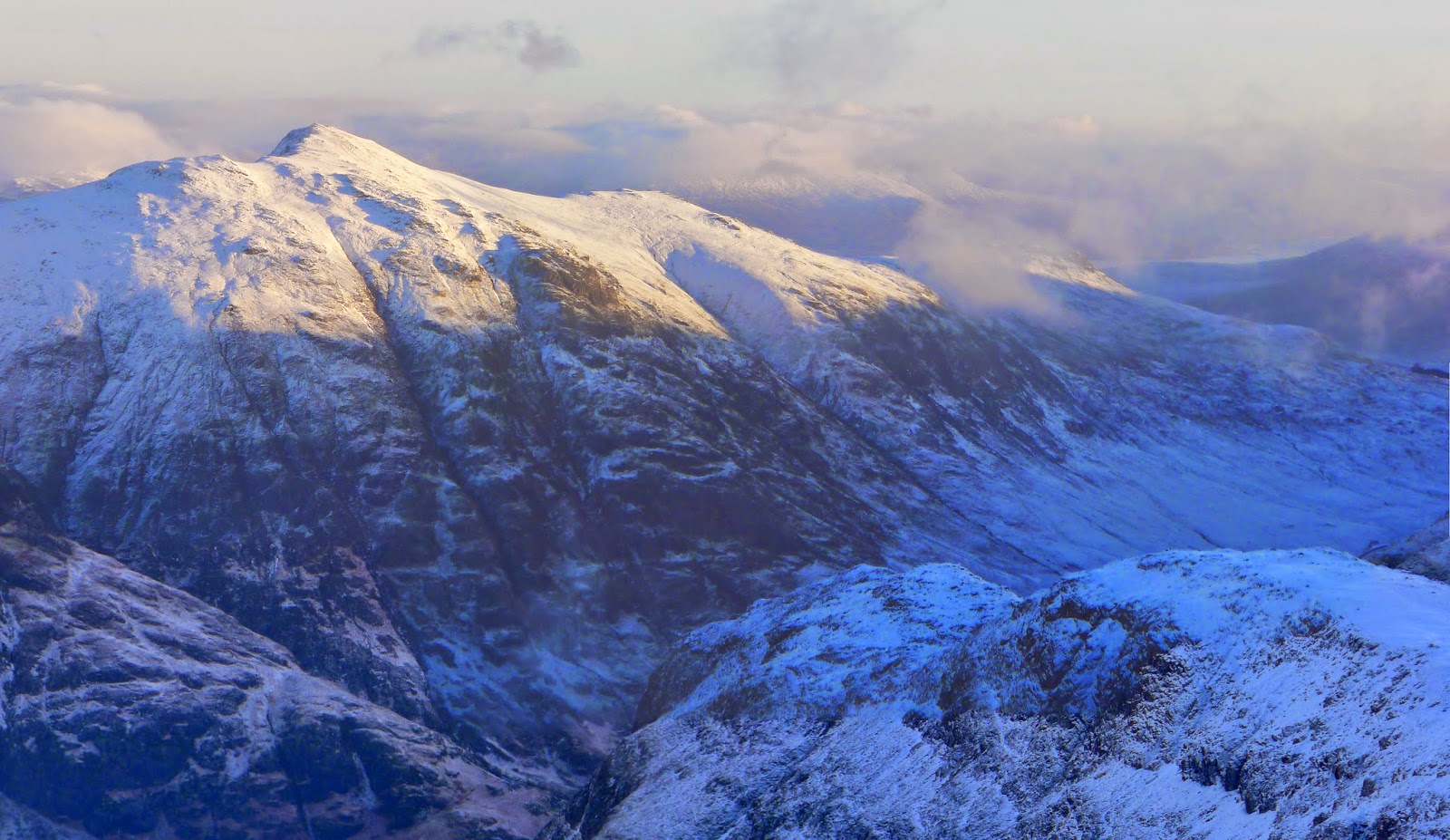 Am really enjoying being back in Scotland. I've missed all the wee things that make Scotland a very unique place. Whether it be the weather, the language, the diet or the junkies walking past me in the streets! I'm really looking forward to what the rest of the season is going to hold, but now it's time to get the new years diet and training underway!