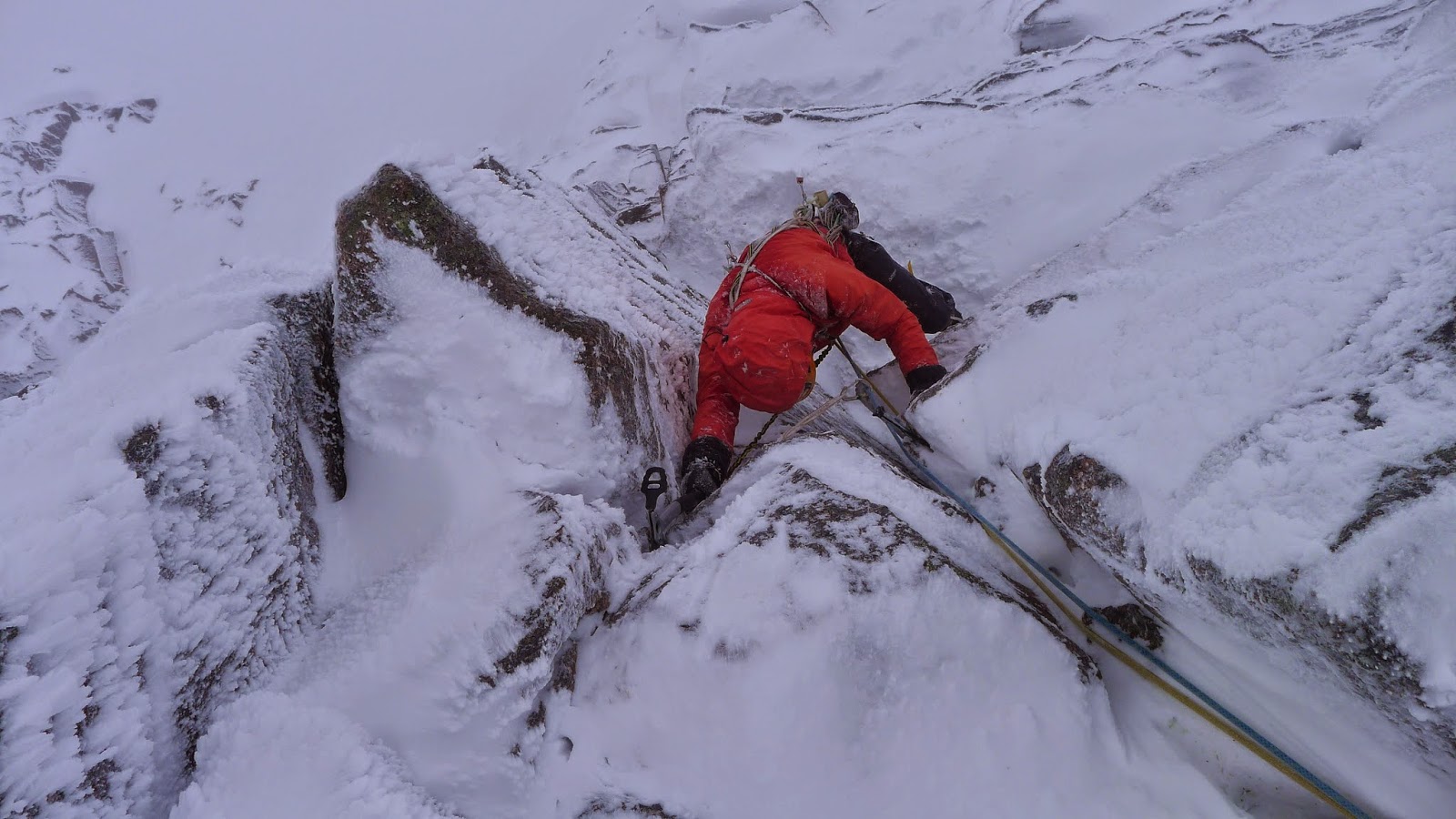 A few days after climbing the Auricle with Mike & Ry, I traveled back up to the Gorms with Gav. We slept in the Cairngorm carpark in the back of his estate car, which was pretty comfortable. I manage to sweet talk him into doing Ventriloquist VII,7 with me. It was the original plan when I climbed with Mike & Ry on the Sunday, so it was still tickling away in my head. Also managing to get a good look at it from Auricle made me even more keen.

The walk in to the crag was brutal. The wind was on constant 'in your face' mode. I looked at the forecast the day before and saw that it was to be Southerly's. Which would be great, as it would mean we would be sheltered at the crag. That never happened though. the wind always manged to find us which ever aspect we were climbing on. Anyways, we got to the bottom of the crag and seen Will Sim with a client. So it was good to finally catch up with him briefly. Gav & I geared up and got ready to start climbing. As Gav got to the bottom of the face he said that he was un-sure about leading any of the pitches, as it was prob a bit too much for him. Which I understood and was happy with. I headed up the first pitch which I thought was going to be around V,6 or something. I was wrong. It has the same IV,4 start as for Auricle then splits off rightwards and climbs over two bulges. The first was really awkward then the second was this overhanging offwidth. Not exactly what I had in mind for the warm up pitch. I manage to squeeze and pull my way up it and pulled onto the ubber belay ledge belay the crux wall. Gav managed to climb the first pitch well, Luckily I was able to haul the bag up for him which made his life easier.


I then rearranged the belay, racked up and set off up the 10m crux wall. It starts off up these steps and then climbs this obvious crack. That begins with a pleasant thin crack, where you get perfect hooks and gear. Then it suddenly changes into a 7 inch wide offwidth crack. In which you have to hook some frozen mud and sidepulls. I managed to get a few hexes in, as well as some large cams which I think would have held. I was a jibbering wreck whilst climbing it though. My head just wasn't settled and I was feeling really pumpped, but I got through and was so grateful for the massive spike at the top of the crack that I just wrapped my arms around.


Gav followed up the pitch. Again he was pleased to have the bag hauled up. The next pitch was another shorty, up a few corners. You could link these into two, but I thought it'd be good to pull the bag up for Gav.


The last few pitches were still pretty pumpy, and now I was starting to feel pretty tired as well as cramping up. The 4th pitch has a few steep bulges in it, then I traversed out right and crab crawled back and forth on a slabby patch. Gav managed o follow with relative ease.

The last small pitch was a chimney which was climbed in the dark. Gav had the misfortune of his batteries running out on his headtorch, so had to climb in complete darkness. Lucky for me it was super windy on the plateau, so I couldn't hear any of his foul lanuage. 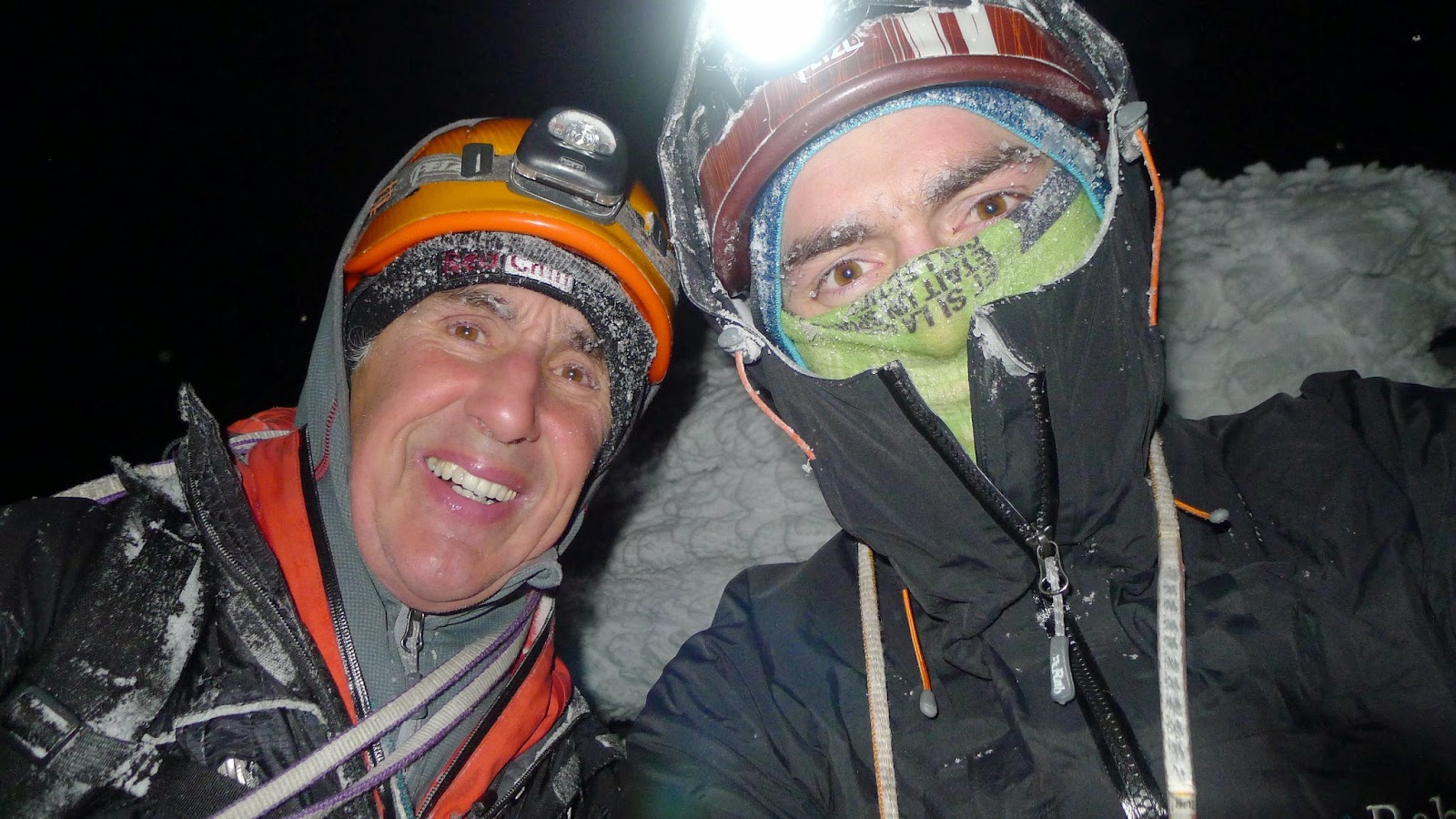 The route was awesome, and was pleased to climb it with my Dad. He did mention that he gets to choose the next route though.